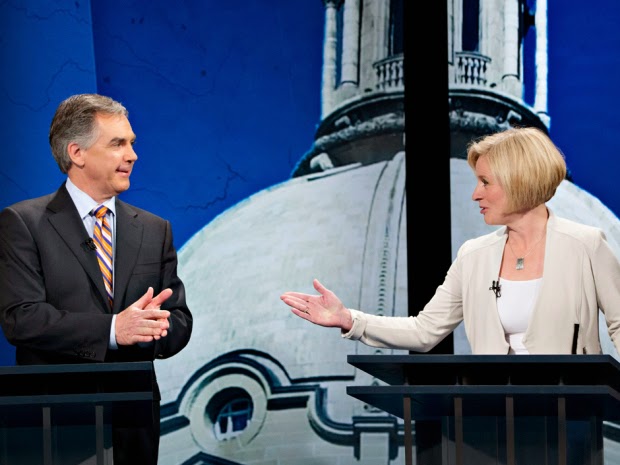 It’s election time in Alberta – the premier heard the call on this blog, or maybe one of the four million other blogs in Alberta that are more widely read, and deigned to ask voters for a mandate. Much to his surprise, the voters counteroffered with a trip to the glue factory. Yes, it looks like we’re going to have a change of government. I know that for people in most democratic countries this is a regular occurrence, but around here it literally happens once every ten blue moons.
People in the fast-paced modern world are too busy to pay attention to boring things like elections, and so here is an objective and completely nonpartisan summary of the Albertan political landscape. 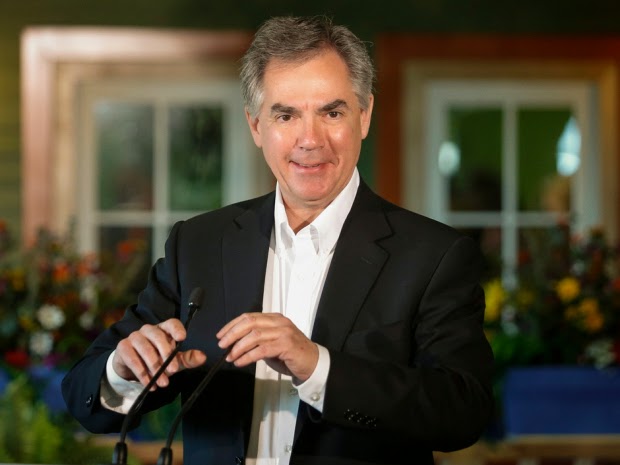 OK, I admit it, the fish was only this big.
Leader: Jim Prentice
Motto: “Guys, C’mon – We Only Held This Vote So We Could Be Re-Elected”
The PCs have been the reigning champions for 44 years, and they’ve gotten as fat and ill-tempered as Robert DeNiro at the end of Raging Bull. They’re in third place in the polls, since at this point re-electing them would be like peasants re-electing their feudal lord. But the PCs don’t give up easy, and they’ve got the money to flood the province with attack ads in the hopes of luring us back to the devil we know. Their desperation is palpable: if things don’t turn around fast, they might have to go and get jobs. 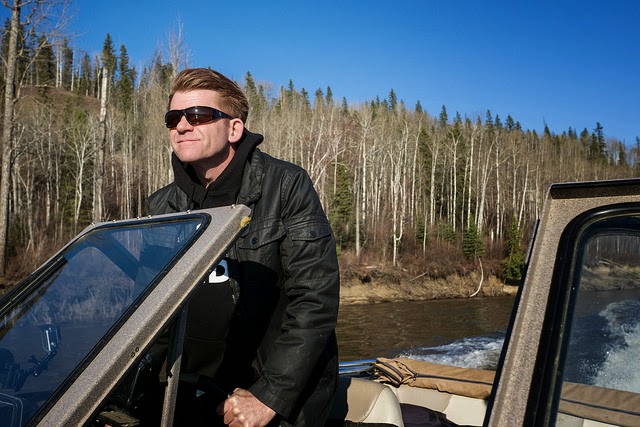 We’re not lost! We just have to keep making right turns until we find civilization.
Leader: Brian Jean
Motto: “The World Was Better Before Gay Was Invented”
The Wildrose are the party of grumpy old white guys, angry about the decline of traditional social values, angry about taxes, angry about the kids spending all their time on the Face Book, angry about the tornader that done ripped up the fields when the taters was fixin to come in. They’re led by Grumpy-White-Guy-in-Chief Brian Jean, who became leader after Danielle Smith’s defection – which she must really regret now. The Wildrose are a close second in the latest polls and stand a good chance of winning. They have an advantage, because in Alberta electoral districts are based not just on population but on geographic area, meaning that rural areas with more canola fields than people have a hell of a lot of seats.
Their campaign centres on a promise to eliminate the deficit without raising taxes or cutting services, purely by reducing the size of the government that provides those services. They’re like a fitness instructor who says that when you lift weights, you have to lift your own muscle mass too, so clearly the way to lift more weight is to have smaller muscles, right?
The Wildrose are working hard to shed their image as bigoted and old-fashioned. They rejected the candidate who railed about “gay activists”, and fired the one who wanted “brown people” in the front of the crowd where the cameras could see them, and reprimanded the one who asked supporters to “bring your wife’s pie” to a fundraiser. Their problem, of course, is that they even had to. 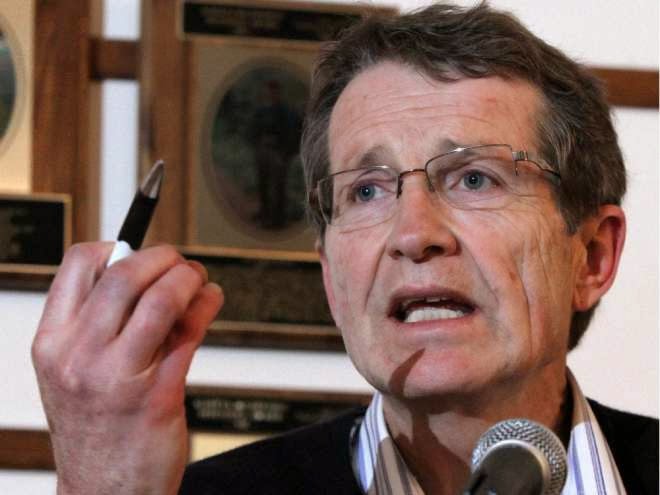 Think of all the poor children who don’t even have pens!
Interim Leader: Dr. David Swann
Motto: “TBA”
The Liberals were apparently in the shower when the election was called. They hadn’t gotten around to choosing a new leader after the obnoxious Raj Sherman resigned, so they went into the campaign with interim head David Swann. Then they could only wrangle up enough candidates for about half the ridings. Swann insisted that this was because they emphasized quality of candidates over quantity, which I think makes the Alberta Liberals the world’s first boutique political party.
I have an urge to vote for them because I feel they stand for people like me – serial procrastinators who never get anything done. 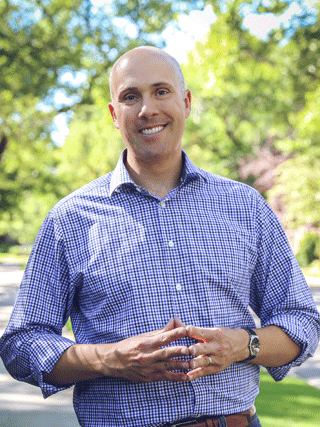 You know, I have one simple request. And that is to have sharks with frickin’ laser beams attached to their heads.
Leader: Greg Clark
Motto: “Not at all like the Liberals. For Instance, Our Signs Are a Different Colour”
A few years back, the Alberta Party had the idea that the reason the centre-left was doing so badly in this province was because the Liberals have a tarnished brand. So the route to government, they thought, was a party exactly like the Liberals, but with a different name. Unfortunately, the plan didn’t work. Though the tarnished brand couldn’t even get ten percent of the vote in 2012, that was still eight times as much as the party no one had heard of before.
The Alberta Party represents the radical centre. They believe in pragmatism and good sense on every issue except supporting someone who might win more than one seat. 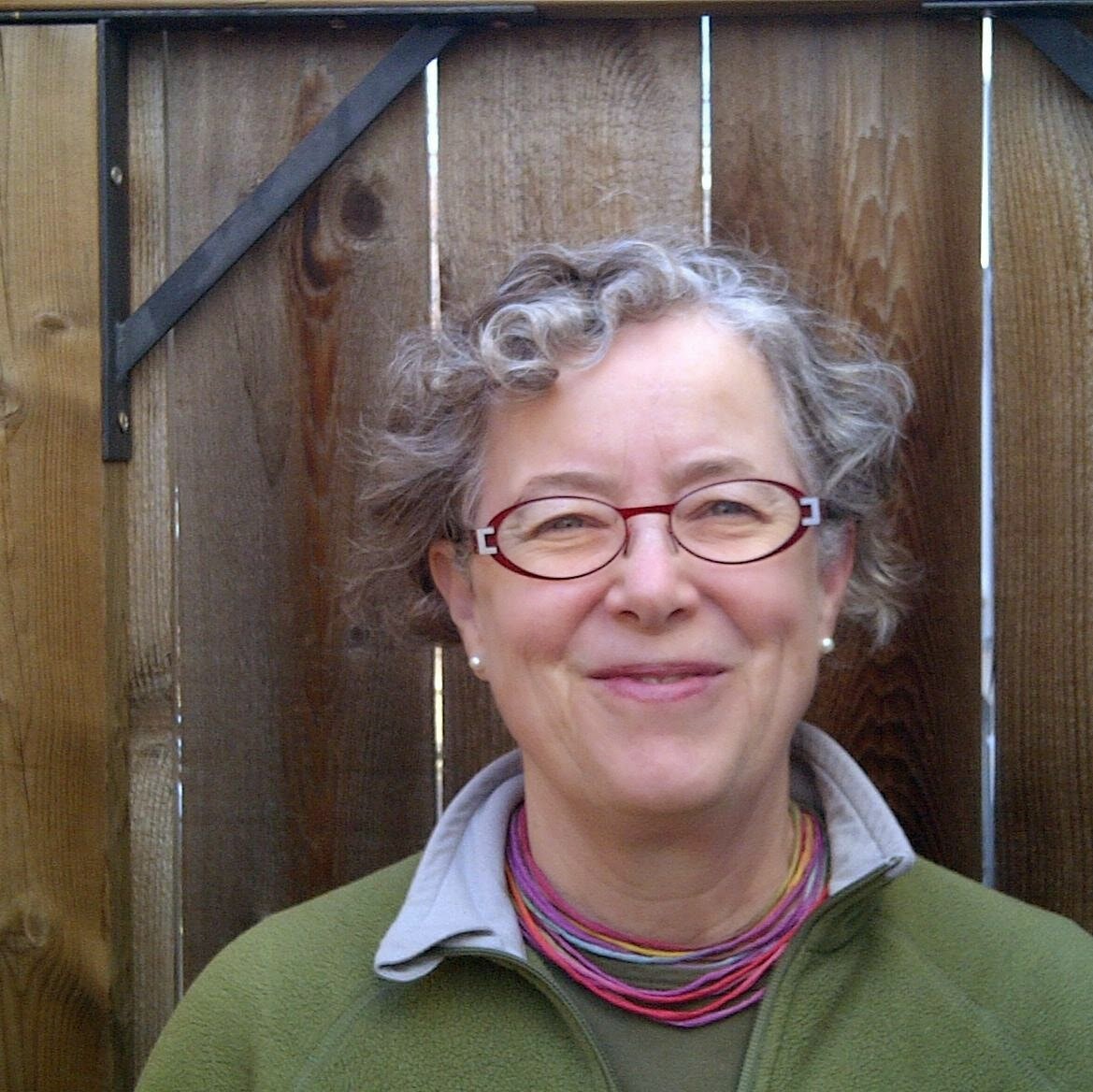 We’re doing the picture here because my backyard is party headquarters.
Leader: Janet Keeping
Motto: “Power Corrupts, So We’d Rather Not Have Any”
With their candour, clear moral stance, and button-down appearance, the Greens have a lock on several key constituencies in this election: organic grocery store owners, ethics professors, and university students who will get stoned Tuesday afternoon and forget to vote. But, you know, it’s not about winning, it’s about doing right by your conscience and bringing attention to your cause. Even if when the media report the results, they list you as “Other”. 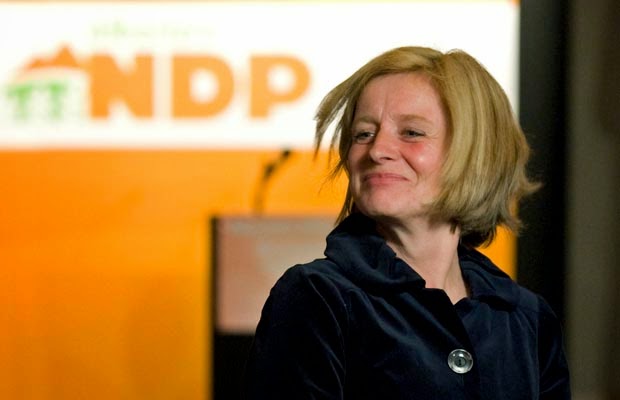 Who’s the third party now, Jim?
Leader: Rachel Notley
Motto: “If Elected, We Will Probably Go on Strike”
With its roots in organized labour, the NDP has developed into the most effective of Alberta’s many left-wing parties. They have a centrist platform focused on reducing government dependence on unpredictable resource revenues and shoring up public services, which they plan to pay for with some newfangled socialist thing called a progressive income tax. According to the latest polls they are in the lead, due to a stellar debate performance by the intelligent and capable Rachel Notley.

I’m not pulling off the nonpartisan act anymore, am I? Fine. You should all go out and vote NDP. I am too impressed with Notley and the party’s policies to make fun of them.

Besides, imagine the look on Stephen Harper’s face if they win.

On April 24, 2015 By Christopher Leapock
Today is the centenary of the beginning of the Armenian genocide, when as many as 1.5 million Armenians were murdered by the Ottoman government. Using the word “genocide” here is a bit controversial, and by “controversial” I mean that it pisses offTurkish nationalists.
The Hürriyet Daily News ran a columnarguing that the Turkish nationalist perspective on the “Armenian issue” should not be ignored, and so I’m only going to talk about that. The Council of Turkish Canadians ran a chilling ad in this morning’s Globe and Mail. Here is an excerpt of a news release from their website that has almost the same text:
Reconciliation – Not Hatred, Fairness – Not Insult
This year, once again we remember and respect the memory of victims of the Ottoman-Armenian conflict during the First World War. The conflict started with  well-documented armed revolt of Armenian nationalist groups (Dashnaks and Hunchaks) against the empire. They committed high treason by collaborating and joining the invading Russian forces. This resulted in their relocation from the war zone. The relocation was a military measure in self-defense, and also to protect all civilians of eastern Anatolia from commencing inter-communal retaliations. Most of the deaths during the relocation resulted from famine of war era, spread of diseases, attacks by bandits, and breakdown of authority in poor war conditions. Both sides committed massacres, both sides suffered tremendously, Armenians and non-Armenians alike. It was a tragic war that has engulfed every corner of the world, including Anatolia!
Now, even if this version of events were true – it ain’t – a monstrous crime would have been committed. The claim here is that because certain Armenian nationalist groups revolted, the civilian population was forced from their homes. This is the mass deportation of civilians as collective punishment – a war crime. And it’s acknowledged that the result was huge numbers of deaths – even the Turkish government says half a million – from famine, disease, banditry, and whatever “breakdown of authority” is supposed to mean.
If this was really all that happened, it would be unconscionable.
I guess what’s supposed to make this a defense of the Ottomans, not a condemnation, is the claim that this atrocity was committed out of “self-defense” and to “protect all citizens”. But you cannot claim that driving civilians out of their homes to die is self-defense. If someone tried to mug me at gunpoint and I shot him, I could claim it was self-defense. If someone mugged me, then ran off and I couldn’t catch him because no one in the neighbourhood would tell me where he was hiding so I drove the entire neighbourhood out of their homes – not self-defense.
As for forcibly relocating civilians to protect them – well, in hindsight, the strategy didn’t work too well, what with the bandit attacks and the starvation. And in foresight, it’d have been obvious the strategy would not work too well. The kind of obvious that makes someone legally and morally culpable for going through with it anyway.
And finally, there is the claim that both sides suffered terribly. I think this is supposed to be the centrepiece of the argument – mistakes were made, nobody’s perfect, lots of horrible things happened in World War I. It’s also specious. Even if Armenian groups had revolted and were committing massacres, massacring different members of the same ethnic group could not be justified.
So if the genocide deniers are right, the Ottoman Empire was guilty of horrible atrocities against the Armenian population. And that’s the best story the deniers can come up with. The truth, as we know, was worse.

I write fantasy. I imagine that if I am ever published, my books will appear in the fantasy/science fiction section of the bookstore. Is that a bad thing? Is it something to be ashamed of? Is fantasy only childish, escapist make-believe? I think the an…