Last night, in a battle fought across the country, the young wizard Harry Potter delivered a resounding defeat to the Dark Lord Voldemort. Potter was widely considered too young and inexperienced to be a serious threat to He Who Now Can Be Named Freely…

A metaphysical interview with Thomas Mulcair 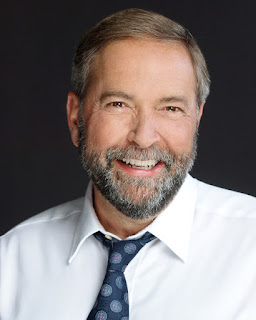 Last on my list of interviews was Thomas Mulcair, the leader of the New Democrats. It took a while to get hold of him, because when I called his campaign office a recording said the line had been disconnected. Eventually I tracked down his campaign manager, who turned out to be crashing on a buddy’s couch for just a week or two until he got some things straightened out.
I was supposed to meet Mulcair in the parking lot of a Wal-Mart on the south side. I stood there wondering why he would choose this place, until I was distracted by the sound of an engine sputtering. An ancient Winnebago came down the road, painted bright orange, with Air Mulcair emblazoned on the side. The motor stalled every time the camper turned left, but it managed to coast almost all the way to me.
Thomas Mulcair got out, his face plastered with a smile that looked like a cross between a game-show host and rigor mortis. He sauntered over and shook my hand energetically, rather like the Cat in the Hat might.
“Mr. Mulcair,” I said. “It seems that your proposed budget, which makes only small changes to the tax structure and social spending, has failed to impress leftists. Was this a strategic calculation to win over centrist voters in Ontario, or are you taking a principled stance against sacrificing fiscal responsibility for redistribution?”
With his teeth bared and his cheeks scrunched up in a massive grin, his reply went like this, “pollscannotbetrustedanywaybreakthroughin905upcomingtookmoralhighroadasalwayscanadasnextgovernment.”
“Are you okay?” I asked. “It kind of looks like you smiled so much your face got stuck that way.”
“photoopneedbaby,” said Mulcair. “zhuli!getmebaby!” He waved his fist at the Winnebago. “BAAAABY!”
A staffer ran out of the camper, carrying a nonplussed-looking baby. She handed it to Mulcair, who cooed at it and kissed it as well as he could without breaking his rictus grin.
“Sorry,” the staffer whispered. “If it’s time for a photo op and he doesn’t have a baby to kiss, he sometimes loses his temper.” She surreptitiously wiped some spittle from Mulcair’s beard. “It’s been a long campaign.”
“Tell me about it,” I said.

A metaphysical interview with Justin Trudeau 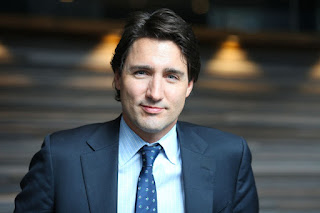 After my unsatisfying interview with the Prime Minister, I met with Justin Trudeau, leader of the Liberal Party. That didn’t go much better.
To start with, he wanted to meet me on a beach in Cuba. When I got there he was lying on his side in the sand, wearing nothing but a red Speedo, long curls hanging over his face. His jaw didn’t so much look chiseled as like it had been carved out of granite to be a Pharaoh’s tomb.
“Mr. Trudeau,” I began.
“Call me” – he brushed some sand off his abs – “Justin.”
“Okay, Justin. The Liberals have proposed a loosely Keynesian budget, trying to soften the oncoming downturn with deficit-funded spending on infrastructure. Do you think this country is really that desperately in need of infrastructure? One might argue that we’re in pretty good shape already, and that increasing spending might lead to a lot of unnecessary and wasteful projects. Like that train line to Pearson Airport that no one ever uses.”
“That’s an interesting question,” he said, “and I love answering interesting questions because of my intelligence and experience.” He pointed to the book on the sand next to him, which was titled Advanced Vector Calculus. “Just some light reading, to rest my brain. Given that it’s an election, I would read something on economics or political science, but, you know, I read them all already. All the books.” He stretched languidly. “Yep, I’m that smart.”
“Sure, okay,” I said. “I wasn’t questioning that, since the perception you’re inexperienced is basically just the product of Conservative attack ads.”
“Oh, I’m” – he gave me a sort of come-hither look – “experienced.”
“But you didn’t actually answer my question.”
“Didn’t I?” He winked. “I don’t know how I forgot, because I love talking about my erection.” There was a really dumbfoundingly long pause before he finally added, “of infrastructure.”

A metaphysical interview with Stephen Harper 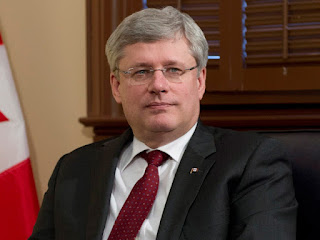 So it’s been a long time since I posted anything here, despite the obvious fact that there is a national election going on and everyone is in a tizzy. I’ve been busy, mostly working on a new book, which is turning out to be six billion times more complicated than I’d thought. Writing is, like, hard and stuff.
Anyway, I did manage to find some time for metaphysical interviews with the major candidates. I’ve been trying to interview the incumbent, Stephen Harper, for weeks. But his staffers refused. I explained to them that a metaphysical interview is not a real interview, because instead of talking to the person you speculate about what they might say. They still wouldn’t do it. “The Prime Minister doesn’t do imaginary interviews,” they said. “You’re not even allowed to pretend you talked to him.”
Then I got a call out of blue. “The Prime Minister is willing to speak to you, to help get his message out to Canadians.” And I was asked to meet Harper at his home in Calgary.
Harper’s home was a black tower looming over what was otherwise a pleasant suburban neighbourhood. Thunder rumbled in the clouds overhead and a chill wind shook the dead branches of the trees. The yard was decorated with severed heads on spikes – Nigel Wright, Michael Sona, a bunch more I didn’t recognize.
Pierre Poilevre was waiting at the door, casually leaning an AK-47 against the shoulder of his blue suit. “The boss is expecting you,” he said by way of greeting.

Sure Jonathan. Any excuse to take a nap. 🙂