Mitch Hedberg once said, “Alcoholism is a disease, but it’s the only one you can get yelled at for having.” Well, there’s also Worldbuilder’s Disease and I’m going to yell at you right now for having it – the simple truth is NO ONE CARES!Worldbuilder’s…

Writing is hard.Ordering your thoughts into coherent and effective wording, with well-paced and enjoyable clarity is not an easy thing. There are those for whom it comes to more naturally, of course, but I’m not sure if I’m one of those people. I edit …

On June 24, 2016 By Christopher Leapock
British voters yesterday chose a print of a late-nineteenth-century oil painting to lead their country for the foreseeable future.
The picture shows a white family at a table drinking tea. A portrait of Queen Victoria hangs on the wall. Golden-tinged sunlight streams in from a window, through which a carefully-tended garden is visible.
The picture has been criticized for romanticizing the past. Its detractors claim its appeal is based mostly on nostalgia and selective forgetting. The picture’s leadership ability has also been questioned, on the grounds that it is an inanimate object that cannot act or make decisions.
“This is a glorious opportunity,” said Boris Johnson, one of the picture’s most prominent supporters. “But let’s not rush into any drastic changes. It’s not like any of us has a plan. Let’s just gaze at the picture and feel wistful for a while, and I’m sure someone will think of something.”
52% of British voters chose the picture, while 48% voted to retain the current system of electing leaders who try to find out what the consequences of their actions will be before doing them.

The wisdom of Cato the Elder 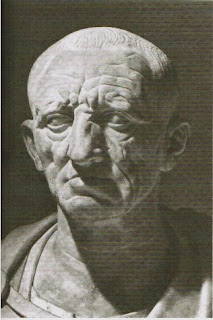 The Roman senator Cato the Elder was not a very nice man. When he was young he fought in the Second Punic War against Carthage. The war devastated Italy, and Rome was nearly defeated. But it finally prevailed and imposed a peace treaty on the Carthaginians that basically came down to “All your empire are belong to us.”
Cato the Elder was opposed to the peace, because signing a treaty with Carthage had the logical implication that Carthage still existed. He was convinced that Rome could never be safe until their old enemy was completely obliterated and the land sown with salt so that nothing would ever grow there again. The rest of the Roman Senate did think that national security sometimes requires a pre-emptive strike, but they were a bit reluctant to go along with a pre-emptive massacre.
So Cato developed what was either an obsession or the weirdest form of Tourette’s in history. To hound the Senate into agreeing with him, he ended every speech he gave – regardless of what subject he was speaking on – with “Ceterum censeo Carthaginem esse delendam”: “Also, I think that Carthage must be destroyed.”
For instance, here is Cato taking part in a debate over Rome’s sumptuary laws:
My fellow senators, while there is some merit to Appius’s points, the text of this bill as it stands is sufficient to address the matter. The provision allowing travel in a carriage drawn by two horses within a one-mile radius of a city, when attending religious proceedings, will certainly accommodate Appius’s concerns. Moreover, the bill does not prohibit anyone from traveling within one mile of a city in a carriage drawn by a single horse, and surely one horse is enough to pull even our dear friend Appius. [Chuckles.] So all told there is no reason for the proposed amendment, and I would recommend that we pass the bill in an unaltered form. Also, I think that Carthage must be destroyed.
Then there is this Valentine’s Day poem:
Roses are red,
Violets are blue,
You are my wife,
And I love you.

When I am down, you order my slaves
To make me my favourite meal;
You always seem to be able to tell
Just how it is I feel.

You’re so pretty and kind,
So charming and coy,
And also I think that Carthage must be destroyed.

There’s also this inscription, from a t-shirt found in the ruins of Cato’s villa:
I’M WITH STUPID è
AND ALSO I THINK THAT
CARTHAGE MUST BE DESTROYED
Nonetheless. I’m starting to think that Cato’s strategy wasn’t as crazy as it sounds. Because if I were a U.S. senator, I would end every speech at every public appearance with: And also I think we should not sell assault weapons to every random person who wanders in off the street.

Block, Apathy and Distractions Part 2: Getting Over It