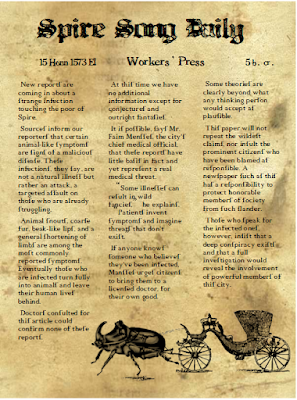 Looking through the ads I'd created for the Spire City stories, I came across this image that I'd forgotten about. I probably created it between writing Season 1 and Season 2, long before the series was picked up by Musa.

It's the same newspaper masthead that I've posted before, but there's an entire article, written as if those who are infected are merely delusional. Not that the infections aren't real, but that the effects described in the episodes are imagined.

The font (done on an old computer I no longer use, so I don't recall the name) mimics the way older printing used an s that looks to us more like an f (sometimes), and some other differences from modern printing. That's from a considerably earlier time period than the late Victorian-ish era of the stories, but still fun to play with.

Not the easiest to read, though...

If you puzzle through the odd letters, it's a fun tongue-in-cheek look at how those in power might undermine the claims of those infected by Orgood's serum. 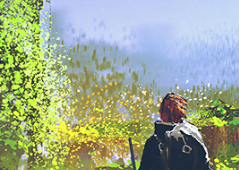